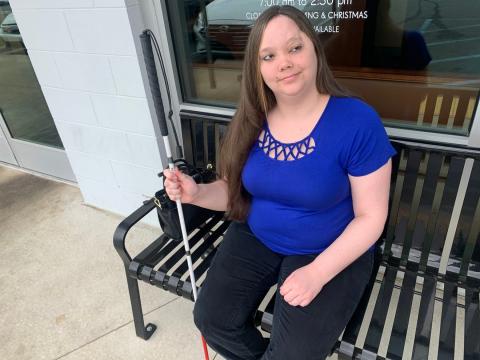 One of the thousands of Florida State University students who will graduate this weekend will not be able to see her diploma, but when she holds it in her hands, she knows her other senses will take over. She will hear the applause, taste success and feel a sense of accomplishment that seemed impossible a decade ago.

Brittany Brearley, 29, from tiny Jasper in Hamilton County, lost her sight on July 2, 2008 at the age of 17. Brearley was just getting off work that day and went to visit a friend who was a couple of years younger than her. Her friend persuaded Brearley to let her drive down the road and back.

Brearley doesn’t remember the events leading up to the accident. She only remembers her friend pulling out of the driveway. “She later told me she was going too fast and got in sugar sand and started to lose control,” Brearley said. “She said she had the choice between trees or a field, so she yanked the wheel toward the field.”

From that moment, the car started flipping and Brearley, not wearing a seat belt, was thrown from the car. The tires were torn off the rim and the rim landed on Brearley’s head.

Doctors told Brearley’s grandparents the chance of her living through the accident was slim, but the odds moved in her favor in the days to come. After feeling like she lost everything from her accident, her boyfriend broke it off with her a year later after the accident, because he didn’t want to be with a blind person.

“It was like, ‘Oh my gosh, the guy I’m in love with is leaving me because I’m blind,’ ” Brearley said. “Later on I was like, ‘Oh thank God,’ but at that time it was crushing.”

Although the accident caused Brearley to grieve, she was able to power through it and graduate from high school and later earn a bachelor’s degree from Thomas University (TU), in Thomasville, Georgia. She earned her degree at TU after completing an associate degree from Tallahassee Community College and taking classes on TCC’s campus through a partnership with TU.

Brearley said that if she were to regain her sight tomorrow, she wouldn’t regret the experience she has had since becoming blind. “I appreciate things on a level that I never would have appreciated before,” she said. “It gave me opportunities to interact with people and learn so many different things that I otherwise may have not been interested in doing.”

Brearley even considered suicide at one point, but she held on tighter and remembered the people she would hurt if she ended her life.

“People are so much more resilient than they realize they are,” Brearley said. “You learn so much about yourself and the people around you when you can’t see them.”

Brearley wanted to share with people who are just becoming blind that the best therapy for her was getting out of the house and living life again. “In the beginning, I felt ashamed of myself and embarrassed,” she said. “Not only was I scarred up and had stitches, and my head was shaved, I was blind!”

Brearley believes the moment she started being around people again was when her outlook changed. “I’m not the blind girl, I’m Brittany,” she said.

Brearley is not alone. In the Tallahassee community, she was able to befriend others who have disabilities and even found love with someone who is visually impaired. Brearley is happy to say she and her boyfriend have been together for eight years.

She says she was able to meet some amazing people since becoming blind and realizes if she hadn’t been blind, she probably would have prejudged them.

What’s one thing she would love to see if she had the chance? Her 9-year-old niece. “I want to look into her eyes and tell her she’s beautiful, even though I already know that she is.”

Brearley will graduate from Florida State University on Saturday with her master’s in social work. “I’m excited. It’s a bittersweet thing,” Brearley said. “I’ve met so many people that have helped me on this journey.”

Brearley said different services FSU provides for students with disabilities, its teachers and her classmates have all made a huge impact on her. “Especially in my early days of going to school, I wanted to just give up, but there was a great support system there,” she said. “They’re not just staff to me, they were more like a family.”

For Brearley, the rough part about graduating will be leaving the people who have helped her.

Putting master's in social work to use

Brearley now hopes to work with blind people and other populations, such as the elderly, and clients who are recovering from alcohol or drug abuse. She is also highly interested in working with veterans.

“I want to be able to walk into an agency and say, ‘I know how to work with that person,’” Brearley said.

This spring, Brearley was able to have an internship at  Elder Care Services,  a local nonprofit social service agency. Brearley has proven to her peers and former supervisor that she is able to tackle challenges that come her way.

“She’s very resilient. She is amazing right out of the gate,” Chelsea Fox, former case manager at Elder Care Services and Brearley’s former supervisor, said. “Because of her visual impairment, she has a lot of challenges and she just rolls with them in a very practical way.”

Fox said it’s a joy working with Brearley and watching her grow professionally.

“She’s the kind of person who is very open and the ideal social worker,” Fox said. “I sometimes forget she has a visual impairment because it’s not a big part of her personality.” Fox added that Brearley’s independence has left a lasting impression.

“Her independence is often far more than some people I know who have no disabilities,” Fox said. “That’s what impressed me with Brittany. She’s a fierce advocate for herself.”

Brearley will move to Jacksonville with her boyfriend the day after graduation and is eager to start the next chapter of her life in the social service field.