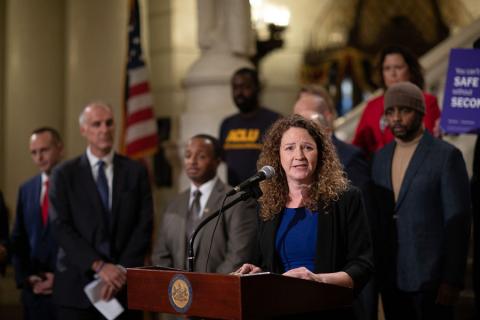 The numbers are the problem for Associate Professor of Social Work Carrie Pettus at Florida State University.

More than 12,000 people are released from state and federal prisons each week, and 77% of formerly incarcerated individuals return to prison within five years.

“If you can imagine going to a doctor and they say here’s this medical intervention that works 23 percent of the time, would we continue to use that intervention? No,” Pettus said.

Pettus, founding executive director of the Institute for Justice Research and Development, or IJRD, is leading a team of 70 researchers and practitioners dedicated to using science to create data-driven solutions to drive down reliance on the criminal justice system.

IJRD is creating models for correctional systems to assist formerly incarcerated individuals struggling to re-enter society. They are training law enforcement officers on identifying and addressing post-traumatic stress disorder among their colleagues. They are addressing trauma among men in prisons.

It’s a whole-system approach to the criminal justice system.

“We work across the criminal justice system from law enforcement to prosecution to jails and prisons to reentry because there are levers throughout the entire system that need to move, and if we move each of those, we will have the most impact,” Pettus said.

Unlike traditional academic research centers, IJRD uses a multidisciplinary approach dedicated to bridging the implementation gap between scientific discovery and changes to policy and practice. By rapidly disseminating study results in real-time, IJRD is re-envisioning the way academic research is conducted and released.

One of IJRD’s major projects is the 5-Key Model for Reentry, a data-driven intervention that helps individuals who are leaving incarceration and returning home to develop well-being so that they can thrive in the community. The five keys are healthy thinking patterns, meaningful work trajectories, effective coping strategies, positive social engagement, and positive interpersonal relationships.

The model has been piloted in seven states in more than 100 correctional facilities and in 24 rural and urban counties with over 3,000 individuals in the context of a randomized controlled trial. Preliminary results suggest that this approach is working as study participants’ levels of well-being improved in the 15-month follow-up period and increased well-being was associated with lower levels of re-incarceration.

Pettus came to Florida State in 2018 and founded IJRD, which has received more than $14 million in contracts and grants, including a significant gift from the Charles Koch Foundation for research related to reducing recidivism rates.

IJRD is already drawing significant attention from state and national leaders who are also grappling with these issues, and it has been designated as a “Big Bets” center as part of a Florida State University initiative to highlight public impact science and connect the centers with partners and donors interested in their work.

“With Big Bets, we want to showcase centers and institutes that are truly making a difference in people’s lives,” said Interim Vice President for Research Laurel Fulkerson. “There is no better example of that than IJRD. Their work to improve the criminal justice system is transformative for both individuals and communities.”

Pettus was honored by the American Society of Criminology with the 2019 Marguerite Q. Warren and Ted B. Palmer Differential Intervention Award, which recognizes a scholar who has significantly advanced differential intervention science to promote improved social and personal adjustment and long-term change among incarcerated individuals. She’s participated in congressional briefings on police reform and reentry issues and been called on by officials in multiple states as they’ve sought to reshape their correctional systems.

Jim Clark, dean of the FSU College of Social Work, said that while many organizations examine the criminal justice system from one perspective or another, IJRD stands out because it looks at the system as a whole and tackles problems with science.

“As social workers, we are constantly working with people in our communities to help bring about positive change,” Clark said. “The criminal justice system is perhaps the most complex and formidable social institution in the United States that requires massive human rights reforms.”

Clark said the team at IJRD has truly made a great quest for justice and well-being for Americans as part of FSU’s research, teaching and service missions.

“The IJRD team is working to transform the criminal justice system with a multisystemic, science-based approach that focuses on human thriving—and they are creating important nationwide impacts,” he said.