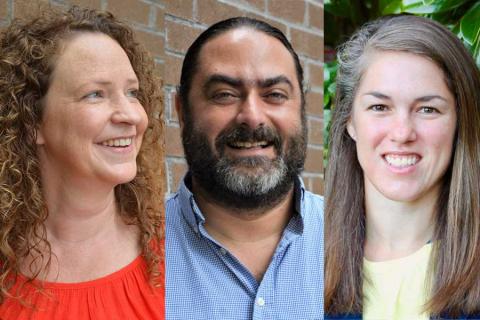 Florida State University has received a grant totaling nearly $1.2 million from the National Institute of Justice to evaluate the effectiveness of a comprehensive trauma-based re-entry program for young adult men.

A team of researchers including Carrie Pettus-Davis, Stephen Tripodi and Tanya Renn of the Institute for Justice Research and Development at the FSU College of Social Work will conduct a 5-year randomized controlled trial. The study will be aimed at addressing trauma as a key mechanism to reduce reincarceration for young men who have been identified as moderate-to-high-risk for returning to prison after release.

“Despite extremely high rates of trauma exposure among incarcerated men, research to date has focused almost exclusively on providing trauma treatment only to incarcerated women,” Pettus-Davis said. “Our study will spotlight a population where trauma-based services are lacking and critical to reducing the incarcerated population in our country.”

The research team suggests a potential driver of young men’s reincarceration is unaddressed mental health symptoms and substance use disorders which often result from extremely high prevalence rates of lifetime traumatic experiences (LTE). LTEs include experiences of child abuse and neglect, physical and sexual assault, witnessing violence in the home and community and having a loved one murdered, among others. Prior studies have shown that 62 to 98 percent of incarcerated men have experienced at least one LTE prior to incarceration.

“It is vital to address the mental health consequences of LTEs for young incarcerated men as the cycle of incarceration release and reincarceration is fueled by trauma-related mental health and substance use disorder symptoms,” Tripodi said. “Treating trauma among this population may be the key to improving outcomes and helping these young men develop and enhance their well-being and thrive at home.”

Program participants will receive evidence-informed trauma treatment with a holistic re-entry approach. The approach will focus on reducing trauma symptoms, such as impulsivity and aggression, and increasing community stabilization factors, such as coping, housing stability and employment — all factors critical to success after release.

The initial program will focus on young men leaving prison and returning to four urban and rural counties in northeast Florida. A total of 400 men ages 18 to 24 will be randomly assigned to participate in a comprehensive trauma-based re-entry program or in a treatment-as-usual comparison group.

“Beginning the intervention during custody allows for the development of a therapeutic and trusting relationship between group members and clinicians,” Renn said. “Interventions which begin during custody and extend in the community after individuals have released from incarceration have shown the strongest short- and long-term effects.”

The study will begin in collaboration with the Florida Department of Corrections in January 2020.