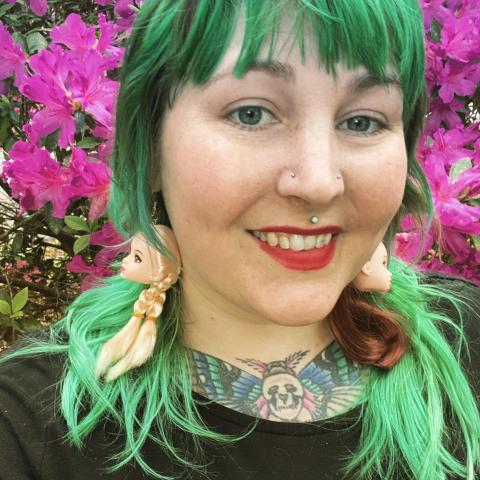 Social work student Taylor Biro can’t recall when she first became involved in community advocacy, only that her interest in it was developed and nurtured by the educators at SAIL High School in Tallahassee, Florida. SAIL, established in 1975, was the first accredited alternative school in Florida that emphasizes individualization, democratic decision-making and applying academics in a humanistic atmosphere. “We were given the autonomy to design our learning,” she recollected. “We were allotted space to think and question the world around us.”

Taylor also found a lot of influence in the music and culture of the punk rock movement, based on the philosophy of creating something out of nothing, not waiting for permission or following a system, and questioning everything. For her, this applied to her own life and communities.

Questioning the status quo of society has remained central to Taylor as she has immersed herself in advocacy in the Tallahassee community. Her willingness to put herself out there and involve herself in various organizations helped create her own momentum and impact on the community. Taylor has made waves and is a leader in a multitude of local organizations, including:

Currently, Taylor serves as the Director of Strategic Initiatives for the Florida Council Against Sexual Violence. Still, her advocacy and ally status applies to various vulnerable populations, including young adults and youths, individuals experiencing homelessness and the LGBTQ+ community.

“I enjoy being part of positive change, no matter how slow-moving it may feel at times,” she explained. “I really get a thrill when an oppressive system is shaken and even an inch of progress is achieved. But more than anything else, I have seen and felt the injustice that people in my community face and I can imagine a future that is brighter because we all have what we need.” With this vision of a better future in mind, Taylor persistently strives for change in a multitude of channels, roles and levels from organizations to individuals.

One of her favorite populations to work with is troubled or at-risk youth. “I relate so hard to having ‘no chill.’ And nine times out of ten I agree with what they are so mad about because it is usually anger that stems from a product of failed systems,” she asserted. “There is power behind making space for anger and showing people who have been harmed that they are safe to show how that harm impacts.”

Taylor’s unapologetic confrontation of injustice is an approach she encourages in her daily life and applies to her Florida State University experiences. “Don’t wait for permission to be passionate about what you believe,” she insisted. When she encountered career advancement barriers in a former position she immediately readjusted her trajectory and goals. She applied and was accepted to the FSU College of Social Work BSW Program to open new doors and continue to pursue other opportunities professionally.

She attributes much of her success to countless people in her life that inspire her, constantly encourage growth and hold her accountable. “Keep a close circle of people around you who will push you always to be better,” she recommended to anyone pursuing their passions. “As you engage in system-led work, remember that your commitment is to the people who receive services and not to the policies that govern us.” Leaders have particularly inspired Taylor at the College of Social Work, including faculty members Carol Edwards and Shalay Jackson. She describes them as “asking the challenging questions and making you feel safe, and speaking with an urgency that comes from knowing their students will one day impact lives for better or worse.”

Taylor’s impact and voice are consistently heard and felt throughout the Tallahassee community, not only through her participation in community organizations but local media channels. She regularly contributes opinion pieces to the Tallahassee Democrat newspaper about local issues. Her presence at the College of Social Work will continue as a student and active community member. She will serve on the college’s Diversity, Equity and Inclusion Committee while staying on to complete her Master of Social Work degree at the college, serving as an active and influential presence in the college and social work communities.